French companies brave the health crisis to contribute to economic activity in Togo.

The French Ambassador to Togo, H.E Mr. Marc Vizy visited Eres-Togo on Tuesday, June 02, 2020. It is a company that is working to make Lomé a sub-regional hub for bitumen supply. Eres-Togo, a subsidiary of the French group Rubis, employs around fifty Togolese employees at its Lomé terminal.
Located at the port, this terminal includes six (06) bitumen storage tanks of 6000 tonnes each. These tanks are supplied by a 1.3 km pipeline which draws the bitumen inside ships specially adapted for the hot transport of bitumen produced in Europe.
On May 28, a Rubis group vessel, the Bitu Express, carrying 45,000 tonnes of bitumen called in Lomé to reload the tanks of Eres-Togo. On this occasion, the Ambassador visited the facilities with the company of the General Manager of Eres-Togo, Mr.Jorge Rico. Accompanied by the economic advisor Mr.Pascal FOURCAUD, the marine advisor Commander Mr.Patrick NOUETTE, he was able to come on board of the ship and he noted that the company remained mobilized to serve its customers in the sub-region, in particular Benin and Niger, while applying very strict prevention measures against the pandemic ” .
H.E Mr. Marc Vizy was pleased to see a French company working, despite the crisis, to consolidate Lomé’s place as a regional hub for industrial services in accordance with the objectives of the National Development Plan. 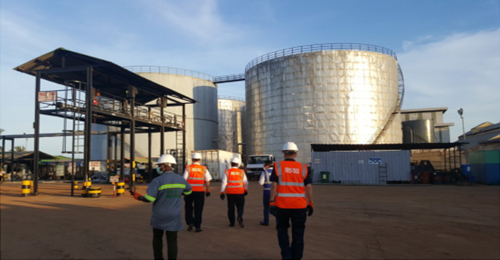 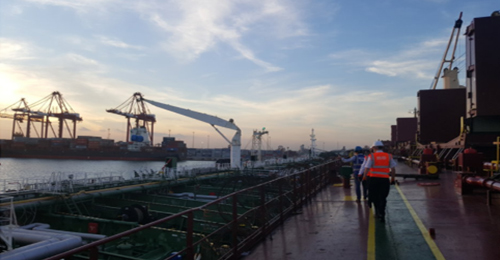